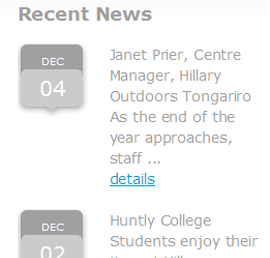 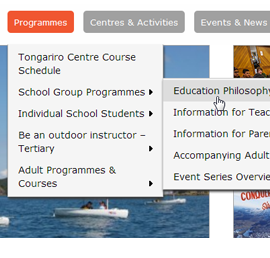 Hillary Outdoors Education Centres (formerly The Sir Edmund Hillary Outdoor Pursuits Centre of New Zealand) is a charitable trust that provides outdoor education primarily to young people. Hillary Outdoors came to Utopia with a number of key objectives in upgrading their website. This included migration to an upgraded platform and rebranding the entire site.

After initial discussions a plan was put in place which included duplicating the existing site and providing the Hillary staff a development site to work on. This website was used to apply general layout and content changes over a few months. The rebranding exercise then kicked in with Utopia providing a mock-up of the new site and then working through possible design options with the staff from Hillary Outdoors.

Angela from Hillary Outdoors was impressed with Utopia's performance saying "I kept having to pinch myself that the website had been seamlessly transitioned from the old OPC one to the new Hillary Outdoors one overnight without any hiccups. It is rare to have such major projects go so smoothly, even with the best planning! All accomplished within budget and deadline. Utopia has been a dream to deal with and they are the ideal choice for any organisation that wants positive, friendly expertise without breaking the bank!"

Overall Utopia is the ideal choice if you:

If you are, or know of, a similar organisation looking to rebrand and stand out to partners, investors and customers then have them contact us today.

Complete the form below and we will contact you regarding your specific project.